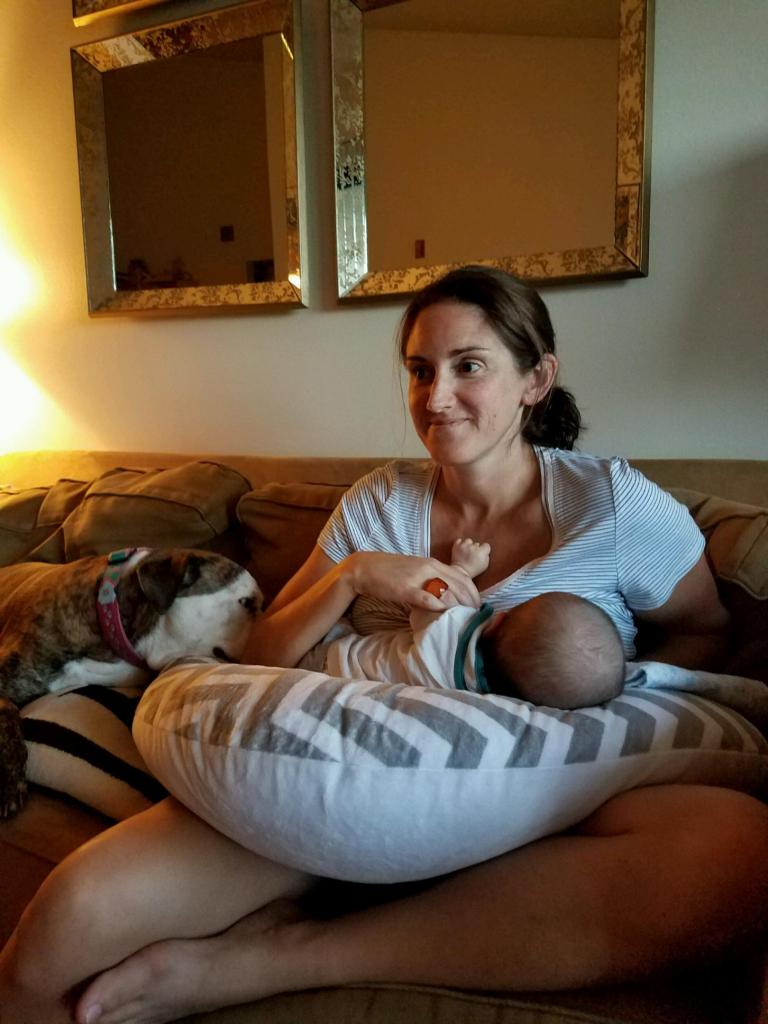 I had no idea how I was going to feel about breastfeeding until I tried it. I’d read and heard all kinds of stories about how it works for some and not for others so I kept my expectations low. My former colleagues at ABC can attest that very high on my list of disliked words, somewhere between moist and panties (come on, you know you have such a list), was lactate. Breastfeeding (in my pre-ready-for-kids days) used to make me squeamish and I wasn’t sure I was going to overcome this feeling as a mom. I can’t really explain why.

My mom did not breastfeed so I couldn’t turn to her for guidance. When I asked her if I was breastfed many moons ago, she shook her head in rapid succession, “Nope nope nope. Nobody breastfed back then.” We’ve since learned that many mothers did, but I guess what my mom meant was those in her social circle did not.

Today breastfeeding is everywhere. At least, it’s all over the various social media channels I follow. I don’t know a single girlfriend who did not breastfeed. It seems like everybody’s doing it. And if you’re not, well, there’s this weird underlying vibe that you’re not being all that you can be as a mom. Which is 100 percent ridiculous. I felt this kind of subtle inadequate vibe while struggling with fertility. I didn’t have time for it then and I don’t have time for it now.

I decided I would give breastfeeding a try and if it worked, great. If not, I wouldn’t let it phase me and I’d raise a formula-fed baby who would turn out just fine.

One girlfriend warned me breastfeeding hurt at first. I had no idea to what extent. Maybe I should have done more in preparation, like attend a class or something, but instead I decided baby and me would figure it out at game-time.

Just minutes after having LG, I was briefly instructed on how to position my arms, hands and breast to feed him.

“Pretend you’re holding a hamburger, or make a big C with your hand. Turn it upside down and squeeze down on your breast and shove the baby’s mouth around as much of the boob as you can. You just want him to latch on properly.”

Latch. Latch. Latch. It’s all I heard from the various nurses and lactation consultants over the next 48 hours in the hospital. And just typing it out is bringing back bad memories.

I loved our hospital. And I got really anxious leaving all the wonderful people who showered us with care when it was time for us to go. But one thing I did not love was the intensity of the lactation nurses/consultants. They were quite the fear-mongers. I later joked with friends that every time one of them came into the room, sometimes in groups, it felt like the gestapo.

“You’re not allowed to leave until LG latches on properly.”

“How many times did you wake up last night?”

“Well that’s not enough. You need to be awake to feed him more than that.”

“We’re here and we’re not leaving the room until we see a good latch.”

I partially understood where they were coming from, but really, if my baby didn’t get breast milk he would survive. This was not a life or death situation and I didn’t appreciate them making it out to be so. And look where their tactics got me. Within a few days, I had bloody/scabby nipples and I couldn’t feed LG off of one breast (and then the other) because it was so tattered. Thank god for the breast pump we rented from the hospital. It saved me and my nipples.

MainMan would come over when it was time for feedings (which I dreaded for the first few weeks) to hold my hand. While LG would latch on, my toes would curl and I’d scream “FUCK FUCK FUCK!” through a clenched jaw so as not to terrify my son. It was brutal and awful and I nearly quit 100 times a day.

One of the lowest points for me in those first few days, when you’re questioning everything enough as it is, was LG’s first pediatric appointment. While we were in the waiting room LG spit up something fierce and disgusting. I caught some of it in a tissue so I could show our doctor and right away the nurse asked, “Are you struggling with breastfeeding?”

“Yup. Uh-huh.” I said, followed by incontrollable sobbing. The kind of crying where you’re struggling for air in between wails and the kind you thought you outgrew at 6.

“You’re doing great,” she said. “He is coughing up some of the blood from your nipple, but it’s totally normal. Do not worry.”

Totally normal? How could this be? I felt like an abusive parent for doing this to my son.

The nurse’s kind words were the first sign of positive encouragement I’d received and if it hadn’t been for her, I very well may have quit that day.

Why did I put myself through this? Why does any woman put herself through this? And why does nobody talk about this awful and painful part of breastfeeding? I was led to believe breastfeeding was this OMMMMMMM-I’m-one-with-nature-and-my-child feeling that’s so peaceful and blissful now let us meditate for an hour while we share in this life-altering bonding experience.

I get it. It isn’t like this for everyone. But to the women out there who may have suffered with breastfeeding and gave up, I feel you.

Why did I stick it out? I can’t say. To prove to the parenting gods I could do it? To save a buck or two on formula? Probably a combination of the two. I kept hearing it got better and your nipples would get used to the tugging and constant contact. And luckily, mine did. I wanted to get to the other side. I wanted to prevail. And we did together. Once LG started to show more signs of alertness, he’d come on and off the boob constantly. I joked with MainMan, “Can you imagine me dealing with this and the pain when we first started?”

LG turns six months today and his daily diet includes nursing, two solid meals (solidly pureed veggies, that is), in addition to one formula bottle from dad. Yes. I used the F-word. I wish it didn’t have such a negative connotation. I wish we’d all get off our high horses and let people parent how they see fit. LG is going to eat a Wheat Thin at some point in his lifetime, so why am I going to get my panties in a twist over feeding him formula? Well, I’m not.

I remember reading a viral post by a mom who was responding to a woman who mumbled “breast is best” to her while she was shopping for formula in the baby aisle at the grocery store. The horror! Fuck that. And shame on the random woman, on any of us, for judging people so needlessly. Fed is best. No matter how it works. And I might also add a happy mom is best. I’m learning as we go that you don’t have to be completely selfless to be a good parent. A little selfishness is healthy. And taking care of you is as equally important as taking care of baby.

I look at LG and him squiggling with excitement when he sits in his low chair getting ready for food and I know my breastfeeding days will soon be behind us. I don’t really have a plan. I just intend to ride this out. What was once torturous is now, for the most part, a good feeling, knowing that when LG is fussy and on the brink of a meltdown that laying him on the nursing pillow and giving him the boob calms him down. This will not last forever, but for now I’m proud of us, where we’ve been and what we overcame to get here.