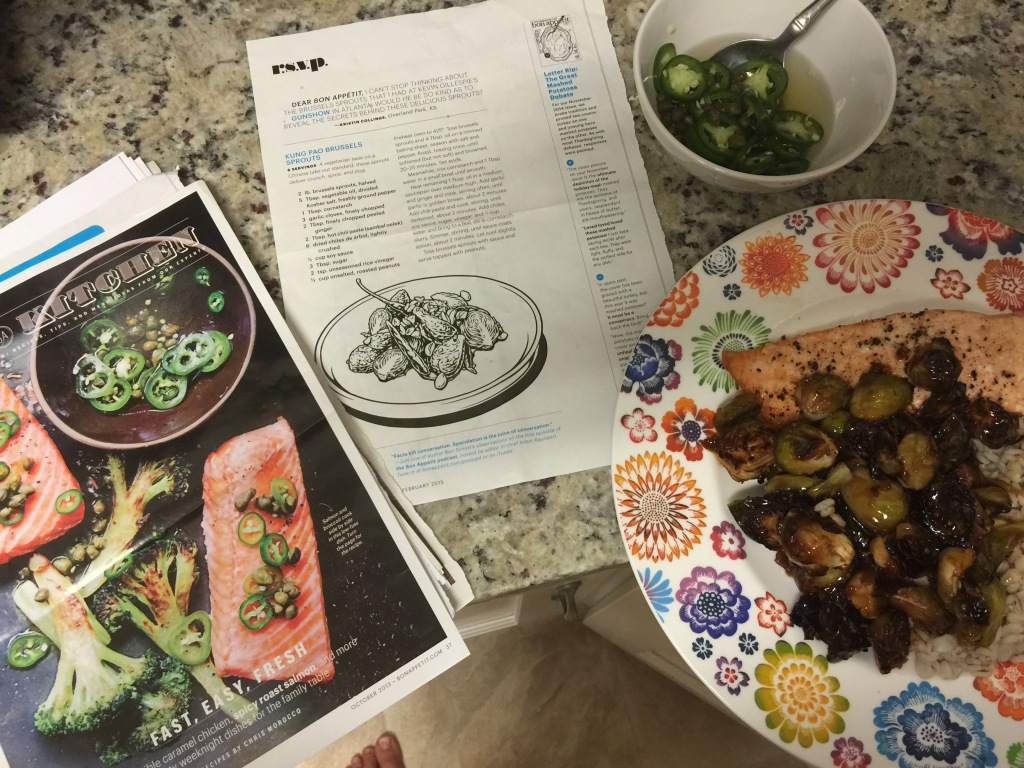 We’ve made each of these items separately in the past and last night I decided I wanted to combine them. The results were fantastic. We added barley as well because the sauce on the brussels sprouts is killer and it needed a starch to soak it all up.

Like a lot of recipes I’ve been trying lately, the brussels sprouts recipe is from the r.s.v.p. section of Bon Appetit. If you’re not familiar, readers write in asking how to make dishes they’ve tried and loved in restaurants. In this case, the reader asks about a dish he had at Kevin Gillespie’s Gunshow in Atlanta. Atlanta’s a quick three hours away, maybe our next road trip will have to include a stop at this his place.

Preheat oven to 425. Toss brussels sprouts and 4 TBSP of the oil on a rimmed baking sheet. Season with salt and pepper. Roast, tossing once, until softened (but not soft) and browned, 20-25 minutes. Set aside.

Mix cornstarch and 1 TBSP water in a small bowl until smooth.

Toss brussels sprouts with sauce and serve topped with peanuts.

Now for the salmon:

Rub salmon with 1 TBSP oil, season with salt and pepper. Roast until salmon is opaque throughout, 10-15 minutes (we use a meat thermometer and typically cook fish to 145 degrees).

Meanwhile, combine jalapeno, vinegar and a pinch of salt in small bowl and let sit until jalapeno is softened (about 10 minutes, or as long as it takes for salmon to cook). Mix in capers and remaining 1 TBSP oil then season with salt and pepper.

Drizzle the chile-caper vinaigrette over the salmon and voila! Bon appetit!

My mother-in-law wrote a cookbook that she self-published and distributed among her friends and family. Along the way she started grading recipes. We decided to adopt her grading method: anything above a B is worth trying again while anything below a C is not. These dishes above both get an A!

So long, Park City!!! What a wonderful week we had. I knew I wanted to give our son a white Christmas this year, after all his talk about snow and skiing and snowboarding, and we were thrilled grandparents were up for the adventure. I know Bippy wished we were in Hawaii when temps dipped into the single digits 😬. Hope you all had a happy merry jolly holiday! . . . . #parkcity #parkcitychristmas #utahisrad #utahchristmas #whitechristmas #makingmemories #lifeisgood
Family photo 😁! I think I have three pix of all of us in the past six months. Grandpa took this one 5 seconds before little slugger nailed a line drive at daddy's head. Who needs T-ball?!