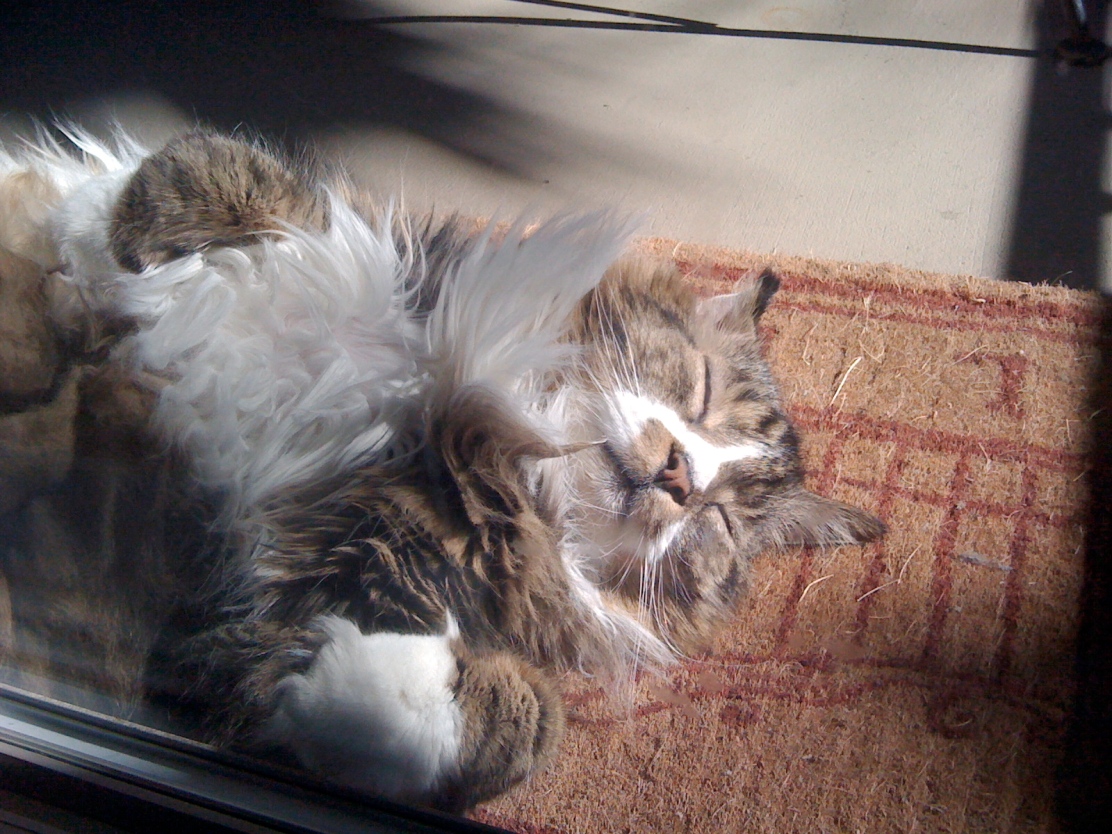 “I never got to finish my story about him,” I said, fighting tears with a failed attempt at laughter.

“Tucker’s a fighter. He’s tough. He’ll fight this,” said my fiance, rubbing my back in earnest as he drowned me in one of his awesome bear hugs.

“Yeah,” I said, unconvinced. The prognosis was not good.

Our “big boy,” as coined by his biggest fan Fashionista, weighed as much as 18 pounds in his prime. He was part Maine coon, part panther, according to his adoring vet in Monterey, Calif. “There is no need to worry about his weight,” he once told my mom years ago… until it dipped scarily low these past few months.

Tucker grew less and less interested in his favorite hobby: eating. I grew more and more alarmed. The mixed meat goo that he once inhaled began to sit all day untouched. After wondering if it was because he didn’t like the can du jour, we offered him his favorite delicacy — canned white chicken. Tucker feigned interest, but that too was left to dry up.

Tucker used to have the appetite of 10 Garfields. In addition to scurrying to the front door any time he heard the screen door click, Tucker had an ear for the refrigerator suction. He could be upstairs counting rats in dreamland, but he’d always make it just in time to stick his little face into the chilled, bright lights. I couldn’t get his food or treats into the bowl fast enough. From time to time, I’d give in to his crystal-lime green eyes and let him lick my bowl of cereal, or in the oddest case, my bowl of spaghetti. He loved tomato sauce.

Like our dog Agnes, Tucker would come when he was called. But unlike Agnes, Tucker was not a cuddler. He wanted our company, but on his own terms, and from a safe distance. He’d do “drive-bys” while we were on the couch at night watching TV.

We’d drop our arms down, scratch his neck and back, and he’d loop around once more before he’d settle on the rug just inches away from our fingertips. A lucky and rare moment was holding him in our arms (or on our laps on the couch) for more than 30 seconds. He’d quickly soak up that day’s dose of love and comfort, he’d squeal out a “REAAYR!” and he’d return to his cozy spot just out of arm’s length.

It’d be understandable if Tucker’s preferred bed was a plush down comforter, but his go-to spot was a Whole Foods brown bag or a Costco box. Tucker didn’t like it fancy. He knew what he liked and he stuck to it. This included dog smells. Growing up he’d lay on our Bernese mountain dog’s 4×6-foot dog beds. The 110-pound Toby would stare at us confused and if he tried to share the bed with Mr. Tucker, he’d be swatted off. The dog crate in our apartment shared the same fate. It was Agnes’ “place,” but from time to time we’d come downstairs in the morning to find Tucker comfortably sprawled out inside. Agnes would look at us as if to ask, “What do I do, Mom?” and we’d shoo Tucker out until he’d hop back in after breakfast.

After 48 hours of Tucker not touching his food, we knew we had to get him checked out.

I dreaded taking Tucker to the vet. He hated it. Getting him into his carrier was like stuffing an octopus into a basketball. In his old age there was less fight in him when he spotted the carrier, but it didn’t make me any less anxious. I felt guilty every time we walked out the door with him, whether we were headed to Carmel and he had paradise awaiting him at the end of a six-hour car ride or whether we were headed to the vet seven minutes away.

We brought Tucker home with relief that day. Blood tests, urine tests, other tests. All clear. He got an anti-nausea injection and he seemed to nibble at his food that night. The vet thought he may have had an infection and we were to report back within the next day or two.

Unfortunately, it was more of the same. I called the vet again and we brought Tucker in for an ultrasound. When I called to discuss the results with Dr. B-, she wouldn’t get on the phone, but ordered the tech to tell us we could come pick him up and she’d talk to us then.

Some people suffer from OCD. I suffer from WCD. Worst case disorder. Always. MainMan said not to jump to conclusions, but Dr. B- had previously left me many a detailed voicemail about her findings. For the first time she wasn’t sharing information with me over the telephone and I knew this meant something awful.

When we arrived at the Cat Practice we were silently and quickly ushered into one of the “nursing rooms.” Dr. B- joined us promptly after. Similar to the meeting I had which ended in my being laid off, I only heard key words come out of her mouth: mass… blocking…colon…time.

I wept. I laughed. I kept shaking my head. No, no, no. Tucker was up there in cat years, but he was going to be around for at least a couple more. His mother was still alive in Connecticut for Christ’s sake.

I asked her to call my parents and explain the situation to them. I couldn’t get the words out without getting hysterical. Tears turned into choked up sobs where I was heaving for air. If we had time, maybe my parents could come down to see him and say their goodbyes. Tucker was, after all, their cat, too. We got him when I was a junior in high school. He’d been my feline sibling for almost half my life and he followed our family from Connecticut to Tokyo, from Carmel to Los Angeles. Maybe my parents would want us to do the surgery, though the doctor had vetoed that as a possibility.

My parents agreed wholeheartedly with her dismal assessment. No surgery. No more if, only when. It was mine and MainMan’s decision.

I grew up with a cat and two dogs prior to Tucker and Agnes. My mom went to the vets with them on their final days. I don’t know how she had the strength to do it. I never had to be the decision-maker and I really didn’t want to bear this burden now.

Tucker came home with us that night. It was the Thursday before Thanksgiving week. We got out all the brown bags we could find, lit candles and cleaned up the outdoor space so Tucker could enjoy his last couple of days with us. He plopped right down on the makeshift bag bed we made for him outside. He seemed oddly at ease, though it was torture for the rest of us, knowing in a few days he’d no longer be with us.

I reached out to friends. Texts. Phone calls. E-mails. Facebook. Twitter. Anyone who would listen. I got tremendous support from animal lovers near and far, and it somehow gave me strength.

I spoke to Tucker. It was a one-way conversation, but I hoped in another realm he might have understood my heartache and turmoil.

Then, as if he heard my plea, he ate a full plate of wet chicken we placed down for him.

I called Choice Veterinary Care. I read about them in a pet magazine and knew when it was Tucker’s time, I’d want someone to come to the house to give him rest. I couldn’t fathom bringing him to a vet’s office and putting him through such stress during his last moments. The doctor thankfully had availability at noon on Saturday.

Friday night we drank wine, watched funny movies, and gave Tucker all the love he could stand. Even Agnes squeezed her big bully butt outside to sniff around and hang out with her older brother. MainMan had the cute idea to sleep with Tucker on the floor his last night. So we did. Sleeping bags, pillows and all, like an indoor camping trip. Tucker probably thought, “What are these whackjobs trying to prove?”

As we watched him sprawled out on his side a few feet from our heads, it occurred to me I hadn’t seen Tucker enjoy a full-on snooze in days, one more telltale sign something was horribly off and he must have been uncomfortable.

Counting down the hours and minutes till goodbye was strange. I kept busy by frantically cleaning and flitting around the house. Then at noon on the nose a sporty looking, 40-something-year-old man came to the door. He spoke with genuine compassion and sympathy for what we were going through and for what was about to occur. I had a strange, inexplicable surge of strength and acceptance. MainMan cried holding onto Agnes. We were both ready. We were all ready. No one would force Tucker inside against his will this time.

Before I came up with the idea of Agnes’ children’s book, I’d started a chapter book based on Tucker and his daydreams. Tucker gazed longingly into the sunshine from windowsills in each of our homes, and though we knew he’d inevitably be hurt, or worse, killed, in the scary world of outside, it always broke my heart a little we couldn’t give him the outdoor adventures he yearned for. I’d hoped to finish Tucker’s book before he passed, with grand schemes of earning enough to buy him that giant backyard of freedom he always wanted.

A dog’s happiness is easily measurable by his wagging tail and excited yips. We are grateful to encounter both from Agnes on a daily basis. A cat’s happiness is a little tougher to discern.

I cried to my mom in the days leading up to Tucky’s passing, questioning whether he was ever truly happy with us in Los Angeles.

“Don’t be ridiculous, Mon. You gave Tucker a great life!” She half-cried, half-yelled into the phone.

Tucker always seemed to have a sassy frown on his face. Was he happy? Who knows. Yet from the moment he laid down gently on his side on the brown paper bag, to the moment he took his last breath, I believe I heard Tucker purring softly. And even though his little heart stopped two short weeks ago, I hope somewhere the purring never will. 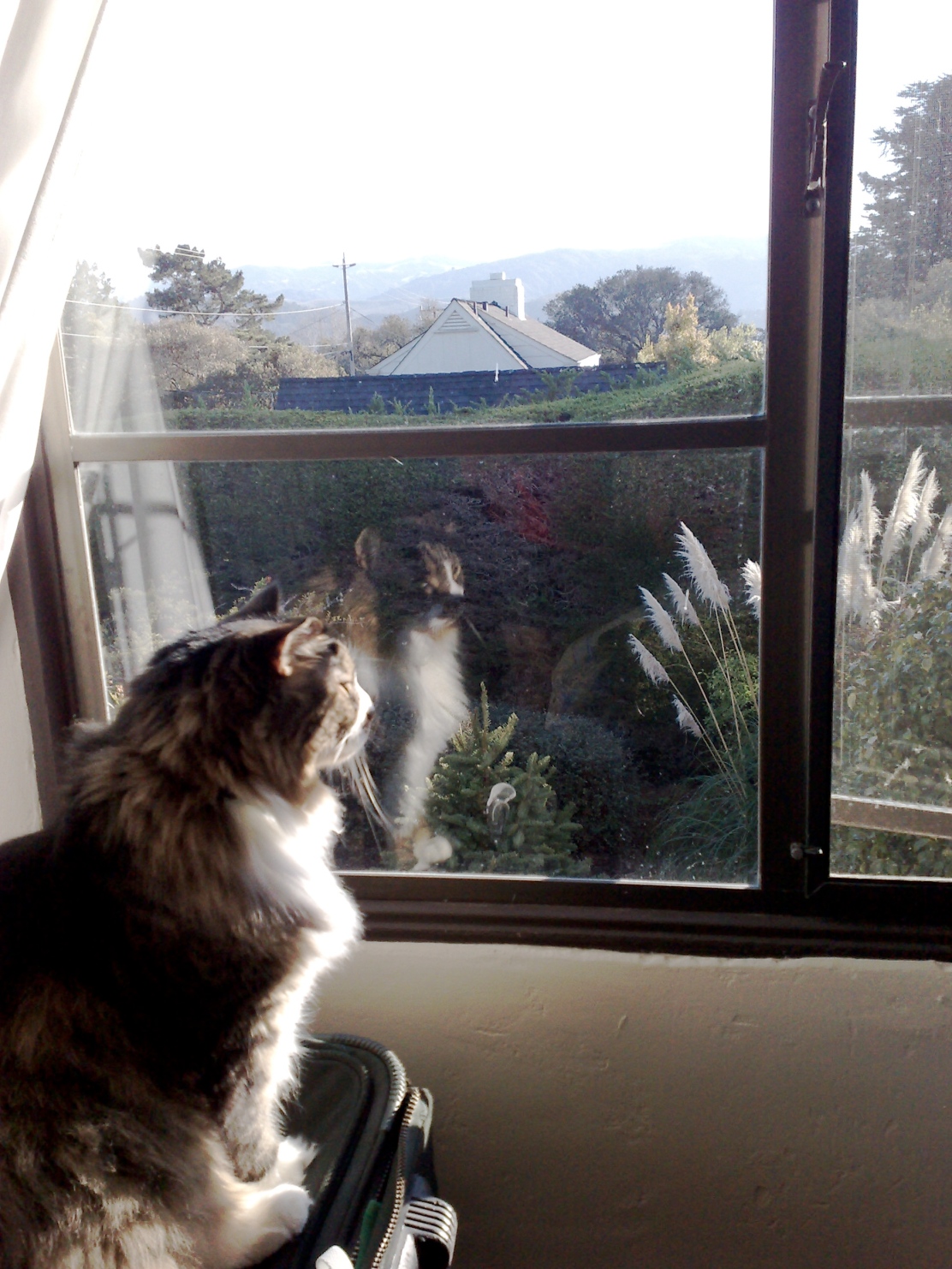