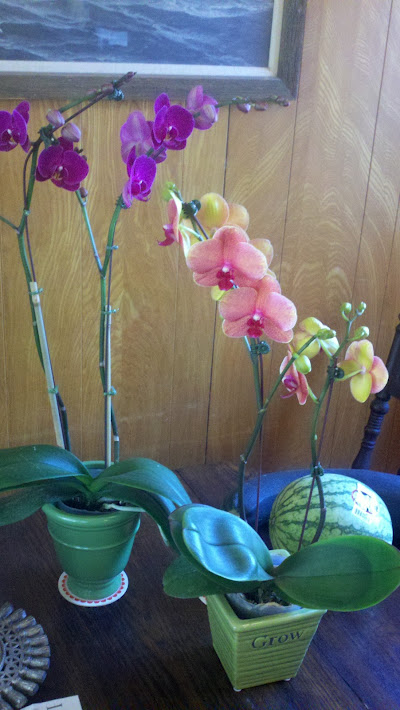 MainMan and I had two special visitors over the Memorial Day weekend. Kola flew in from Kentucky and PitMom flew in from Philadelphia. Both are besties from the days of UVA S’Women (that’s swimmin’ to the masses) and it was an absolutely joyous weekend. We laughed so hard we cried, we danced, we sang (MainMan got it on tape on his GoPro), we drank and just could not have been more excited to be in each other’s company. Last year was the first year me and my friends decided to have a reunion trip every year on Memorial Weekend. We tried to motivate others to join us, but sadly we could not. Too many of the old crew are preggers or with kids on every arm.

We took the girls to Orchid Fever on the way home from massages at Happy Feet and little did I know they’d leave a treat for us before their departure. MainMan and I went back, per their direction, and the girls had purchased a $50 gift certificate for us. We ran around the store like kids at FAO Schwartz.

“We’re buying two and having a contest!” I yelled with devilish excitement.

We’ve had countless orchids in the house and we’re consistently bickering about what the best method is to prolonging their blooming life.

MainMan has an edge, or so he thinks, for chatting with a horticulturist at work who gave him suggestions. His is the purple, mine is the orangy one.

FoxyLady, who loves herself a good flower, once told me I should give it an ice cube a week. That’s the method I’m going with.

MainMan’s tip is to spritz it twice a day — morning and evening — so the buds that haven’t bloomed open before they fall off from thirst. He has marked on the calendar the dates he’s watered it.

The young guy in the store told us to water them sparingly, waiting a day AFTER it seems dry to water it.

It’s been a few weeks, and the separate plants, which we’ve named after the girls and their color preferences, are both doing equally well. Both have buds opening and one or two flowers closing.

We will be tracking their success, but in the meantime, GO PITMOM! If you have any orchid-keeping tips, please share!